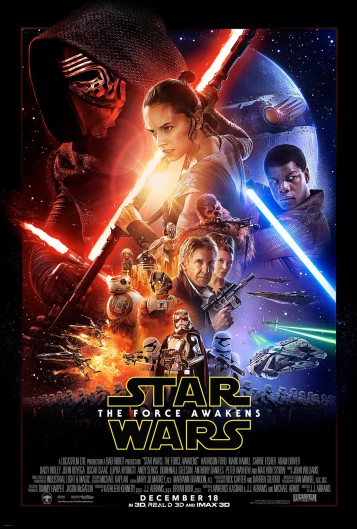 So I decided to give myself a little bit before I wrote my review of the newest Star Wars film, The Force Awakens, for a couple of reasons: one, I wanted to let myself digest the film.  After all, I came out of The Phantom Menace raving about how incredible that film was.  In retrospect, that film was visually amazing, and I think that many who came out of those first showings were seduced by its smorgasbord of visually appealing aspects: the pod race, the inclusion of CGI, and the much slicker and faster-paced lightsaber fight that occurred near the end of the film, but I digress.   The other reason that I wanted to take a little time before I wrote this was because I wanted to give myself a chance to see the film a second time.  After all, the first time one sees a film like this for which expectations are extremely high and one is caught up in all of the hype and hoopla for the film, it can change the viewing experience.

That being said, I have now had adequate time to both think about the movie and see it a second time without all of the craziness of that first experience.   It should go without saying, but SPOILERS AHEAD!

The film begins by letting us know that Luke Skywalker is missing.  Apparently he attempted to restart the Jedi order by training a new group of young students.  Having failed at that, he self-imposed himself into exile.   The remnants of the Empire (now called the First Order) are desperately searching for Skywalker as is the rebellion (now called the Resistance).  We are taken down to the planet of Jakku where we quickly learn that a piece of a map that leads to Skywalker has been uncovered and is quickly placed in a droid by the name of BB-8.  BB-8 is “owned” by a cocky resistance fighter by the name of Poe Dameron who is quickly taken captive by the villain Kylo Ren.

Shortly after this, we are quickly introduced to a young lady who has been exiled herself to the desert planet Jakku by the name of Rey.  We quickly learn that Rey is quite able to fend for herself, which she does by scavenging parts from old wreckages of ships that crash landed on the planet’s surface during a battle which took place thirty years before the movie began.

Things quickly begin to accelerate after this when we meet a Stormtrooper by the name of Finn (well, actually he does not have a name, only a designation that begins with FN) who realizes that his conscience will not let him be controlled by the First Order, so enlisting the help of the captured Poe Dameron, he escapes the Star Destroyer that he is on and crashes on the surface of Jakku where he meets Rey (who is now traveling with BB-8).

They escape the planet on a familiar ship and end up meeting up with Han Solo and Chewbacca.  I don’t want to rehash the entire plot by at this point, but let’s say that once they meet up with a very wise alien by the name of Maz Kanata and find Luke Skywalker’s lightsaber (in one of the strongest moments of the film) the rest of the film is spent trying to return said lightsaber to its former master, with of course our heroes being drawn into a much larger war along the way.  The film then concludes in the only way that it can, setting up a much larger story to take place in the sequels.

The first point that stood out to me after seeing the film both times was how much fun and adventurous the film was.  One of the feelings that was lost in the prequels was that sense of adventure and fun.  The original trilogy (especially Episode IV) was an adventure.  Sure, it was a story that we had seen many times before (i.e. Joseph Campbell’s hero archetype), but we were introduced to a young character who felt out of place in his mundane world, who was thrown into a much larger world that he did not understand.  Along the way, he learns that he is quite special and he has an adventure that leads to him helping save the entire galaxy.  In the prequels, we are introduced to a character 45 minutes into the movie who is far too young to make any kind of real difference and we were already armed with the knowledge that he would throw the galaxy into ruin as opposed to saving it, which made his character incredibly hard to root for.

In The Force Awakens we are introduced to a character who much like Skywalker is out of place on a boring and mundane world, who is special and ends up in a new world aided by an older and wiser guide.  It is one of the film’s strongest points and according to many, one of its weakest as well.  Many have pointed out that beat by beat this film is a retread of Episode IV; it’s a valid point.  From the desert planet in the beginning, to the Mos Eiseley like cantina, followed by the ritualistic death of an older character, to the destruction of a massive station, the film does essentially redo what has been previously done.  But, just like Shakespeare did when he took a poem called “The Tragedy of Romeus and Juliet” and wrote a play called “Romeo and Juliet”, new life is breathed into this story.  Not only is new life breathed into it, the film also brings with it a whole new set of actors who have given us once again a reason to cheer and a reason to hate.

One of the strongest aspects of the film is its new protagonists and antagonists.  Daisy Ridley (who is going to be a star in her own right) is incredibly likeable as the sad, but strong character of Rey.  Not only is she easy on the eyes, but she brings a quiet resilience to a character who is reluctant to accept her destiny.  John Boyega plays an equally likeable Finn, who is the misguided and reluctant hero that once Han Solo was in the original trilogy.  He is also surprisingly funny in parts.  Adam Driver is perfect as the main villain in the film.  He is nowhere near as confident or deadly as his idol Darth Vader and the audience can clearly see that this tortures him throughout the film.

The supporting characters do their jobs although they are not very flushed out.  One major disappointment was that of the character of Captain Phasma (played by Game of Thrones’ Gwendoline Christie).  For all of the hype she was given by the directors and writers, it was a bit of a letdown to see that she didn’t have much of an impact on the story.  Of course it didn’t help that she makes a questionable decision in the third act of the film.

General Hux (played by Dominhall Gleeson) is another character that shows promise, but isn’t completely flushed out.  From what we can gather, he was an opportunistic upstart within the Empire who seized an opportunity to usurp power from the vacuum left from the Empire’s defeat after the battle of Endor, but once again I was left wanting to see this character given a little more opportunity to shine.

Poe Dameron is the final supporting character that we meet, but don’t learn too much about.  All we know is that he is the best pilot in the galaxy, and that’s about it.  He befriends Finn early on and then disappears for a while, before we meet up with him again near the climax of the film.

Of course I would be remiss in not mentioning the turn by the original returning cast.  Harrison Ford seemed to most naturally fall back into his role as the wise-cracking and cocky Han Solo (who we actually get to see do some smuggling).  He is given the most to do of the original three, and he does it well.  We do get to see that his character has gotten a bit wiser over the years, but is still the same smooth talker that he originally was.  Carrie Fisher fares a little less well with her role.  She does not get much screen time and much of it is reduced to exposition.  She is a welcome sight in the film though.  And while Mark Hamil’s Luke Skywalker provides much of the motivation for the action of the film, the character himself does not receive much screen time.  But it’s enough to let us know that he will play a much larger role in the upcoming Episode VIII.

The one criticism that I have is that there is no big moment.  In A New Hope, everything built up to Luke firing those two torpedoes into the exhaust port in the Death Star.  In The Force Awakens there are a series of minor climaxes, but no huge payoff.

Overall the film is a massive improvement over the subpar prequels, but more importantly it has instilled hope in a series that had lost so much of it.  It is quite fitting that this film borrows so much from its predecessor A New Hope because essentially that’s what it is, new hope breathed into a franchise that was in desperate need of it.  One can only hope that its sequels continue the trend that it has begun and improve upon what they so effectively have rebooted.

2 Responses to The Force Awakens Review