The five movies that were great in childhood, but horrible in adulthood.

So, once again I found myself watching one of my favorite movies from childhood, and midway through the movie, I realized that in all reality, the movie is a piece of crap.  This got me wondering: how many movies did I see growing up that I loved, but if I went back and saw them today, I would hate?  The answer: more than I would like to admit.  So for your pleasure, after much research, and thought, I have compiled a list of what I think are the top five movies that were great as a kid, but absolutely torture to watch as an adult.

5  Flight of the Navigator 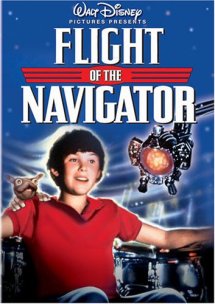 Now here was a movie which had it all: spaceships, time travel, the voice of Paul Rubens (AKA Pee-Wee Herman), and let’s not forget Sara Jessica Parker as a sympathetic candy striper with a heart of gold.  Some of us remember this movie about a kid who falls down a ditch and wakes up in the future with no idea how he arrived there.  Later we find out that an alien spacecraft (voiced by Paul Rubens) had picked him up and taken him there.  Eventually the kid escapes from NASA gets back on the ship, rides around for a bit, and then is taken back to his own time no worse for the wear.

My main problem with this film is the acting.  The kid is horrible.  Now, he’s not Jake Lloyd in Episode I bad, but its pretty close.  Not to mention that the explanation of time travel is not what we call scientifically sound.  The only redeemable facet of this movie is Paul Rubens’s vocal work as the A.I. of the ship.  Otherwise I would simply just remember this movie rather than watch it again.

Here was a movie that I simply loved as a child.  I wanted to build my own spaceship out of a tilt-a-whirl.  I wanted to go into space and meet friendly alien children.  But then I grew up, and apparently, so did my taste in movies.  I had not seen this movie in about ten years, when I saw it in the store a couple of months ago.  I couldn’t believe my luck; finally I would get to watch this jewel of the cinema again.  Boy, can my memory play tricks on me!  First off the “science” used in the movie is sketchy at best.  Let me get this straight: Ethan Hawke dreams up an equation/ CPU motherboard (tough to tell with the graphics of the time) and then River Phoenix (his scientist friend) discovers that the equation makes a bubble that he can control with his keyboard?  Then they build a spaceship with a tilt-a-whirl and some wood (during a musical montage), fly it out to space (never experiencing weightlessness), and meet up with some young aliens who happen to breathe the exact same mixture of elements as we do.  Don’t worry though, through his experience in space, River Phoenix learns to get the girl of his desires.  It worked when I was young, but come on, this makes Armageddon look like 2001.

3 Masters of the Universe

Remember that 80’s TV show that was made simply to sell action figures?  Well, this was the awful movie of that TV show.  Now, most of us look back at the show He-man with fond memories.  Let me be the first to tell you that those memories are misleading.   The show was quite awful, animation-wise, story-wise, and Orco-wise.  So when they decided to make a movie of the television show, there was no way that it could have gone well.  It went worse.  Maybe it was the “cosmic key” idea that screwed the whole thing up.  Maybe it was the fact that the earthling mistook that key for a Japanese synthesizer.  Or it just could been the fact that it was taken from a second rate show, using second rate actors (excluding Courtney Cox, yes, she was in it.)  Either way, not quite as good of a movie as you might remember.

We’ve come to what might be the most controversial entry in this post.  The NeverEnding Story is a movie which is beloved by many of my generation. It is the story of a young man, who unknowingly becomes part of a story that he is reading. During the story we are introduced to a fast snail, a rock monster, the princess who has not been named, Atreyu and of course a Dog dragon.   Now, when I was a kid this movie was amazing, I kept reading different books hoping that I too could play a part in their story, but it didn’t happen.

Just like every other movie on this list I had fond memories of this film, until I took a look at it a couple of months ago.  Now the number one gripe that I have about this movie is that it is really weird.  Yes, I know some of you may be thinking “Why not Labyrinth then?” Well, in my humble opinion, Labyrinth’s strangeness fit that story better.  This movie made me slightly uncomfortable.  Furthermore, nothing really happens in the first thirty minutes of the movie (besides weirdness; if you don’t believe me, just watch the talking snail).

The last problem that I have with this movie is that the ending sucks.  The whole planet gets reduced to the size of a piece of gravel, and the kid has to make wishes to make it bigger?  Really?  Then all of a sudden, he’s back flying on his dog dragon, and it’s like the events of the whole movie never happened.   Which is great… if I’m nine. 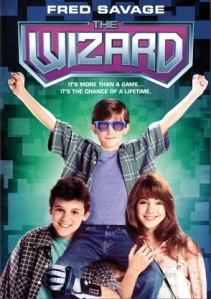 When I was a kid and I first saw the ad for the Wizard, I freaked out.  Not only was there a movie in which the “power glove” would be featured, but they would also be unveiling the legendary Super Mario Brothers 3.  So naturally, me and a few friends went to see the movie, and we loved it! I started training, so that I could compete against Lucas in the Video Game Showdown.  In fact, that was when I first developed my crush on Jenny Lewis.

A couple of months ago, I sat down to watch this movie again.  What was I thinking when I was a kid?  Not only is the movie poorly written, acted, and directed, but it is an hour and a half long advertisement for Nintendo and Universal; literally scene after scene is littered with product placement. I bought the power glove because of this movie, and let me tell you, it did not do what it did in the movie.  But I digress; when we were children, we were constantly bombarded with subliminal advertising (i.e He-man, G.I. Joe), and there was no bigger offender than The Wizard.

A lover movies, television ,video games and life.
View all posts by Q →
This entry was posted in Articles, Movies. Bookmark the permalink.

12 Responses to The five movies that were great in childhood, but horrible in adulthood.