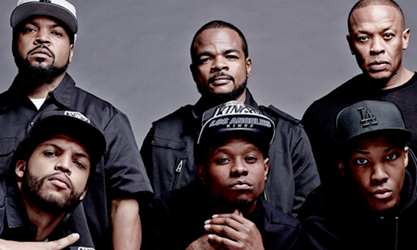 Here we go again with my second prediction for how well a movie will fare at the box office. This time, we are going to be talking about the upcoming music biopic Straight Outta Compton. The film follows the meteoric rise of one of the first “gangsta” rap groups NWA. The film follows them from their meager beginnings to their multiple run-ins with the law to sell out concerts, featuring their anthem “F— the Police”, a song which seems to be gaining momentum again with the current unrest in so many places in America.

But I digress; this article is supposed to be about how the movie will do financially and critically. The movie has been advertised well, and it seems that there is a fair amount of interest in the film. The one drawback? Violence, some will be driven away from seeing the film because they are afraid that a film like this might bring violence with it much like Boyz in the Hood did in the early 90’s. It is enough of a threat that Universal has basically said that they support any extra security that theaters would like to employ. I think that this might hurt the movie a bit, but not kill its opening weekend, so here goes:

A lover movies, television ,video games and life.
View all posts by Q →
This entry was posted in Movies, Predictions. Bookmark the permalink.