Suicide Squad- the review (some spoilers) 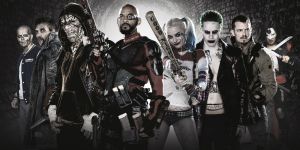 So I finally broke down and spent the $5.99 to watch what was once highly anticipated for me, Warner Brother’s Suicide Squad.  I had pretty high expectations (in spite of all the negative comments I had heard) after all, I am still a huge fan of Man of Steel, and while it was not perfect I had a great time watching it (you can read my review of it here).  So I did not put too much faith in those reviews.  Unfortunately, turns out they were right.  Suicide Squad, while well intentioned, suffers from a lack of clear vision and a nonsensical plot that wastes both some wonderful performances and some great characters.

The film starts off quite promisingly, introducing the audience to our rogue’s gallery of villains:  Harley Quinn, Deadshot, Killer Croc, Enchantress, and Captain Boomerang.  Their introduction is frantic, quick and effective (Hint: Look at Harley Quinn’s introductory freeze frame for an easter egg).  We are also introduced to Amanda Waller, played effectively by Viola Davis, who tells a room full of military types about her plan to produce a group of super villains to combat rogue metahumans, while at the same time giving the government plausible deniability.   It is at this time that we see how most of the villains were caught or how they were created.  (Look for a couple of Justice League cameos here).  At this point the film still had a fair amount of promise.  But it soon goes off the rails.

I’m not going to waste time here explaining the rest of the plot, because it is pretty much a by the numbers hero film, which is ironic because it is supposed to be about villains.  Instead I am going to list the problems with the film.  First of all the main villain (spoiler alert: it turns out to be Enchantress).  Her motivations are never clear nor is the exact purpose of the “machine” that she is building.  Secondly, by the time that the protagonists have their final showdown with her the CGI is terrible.  I’m going to ignore the weird Axl Rose-type dance she is pulling off near the end, but her head clearly does not match the rest of her body.  Not to mention the fact that her brother (the other villain) has no clear motivation for what he is trying to accomplish.  The whole scene comes off looking like some weird rejected scene from Ghostbusters.

Secondly, if you are going to make a film about villians, they should probably be pretty villanous.  The problem is that in the third act of this film, they act downright heroic.  They nobily face off with an enemy that could kill them, because it is the right thing to do.  So the question now looms: How are we supposed to buy them as truly evil villains in any other DC films?  Sure, I understand what an anti-hero is, but look at Deadpool; he saves the day, but is still clearly an asshole.  These “villains” come off looking more morally good than Batman or Superman.

Thirdly, I have no idea what happened, but my guess is that they ran out of time and had to make due with what they had shot already, so they pasted it together with the tact and talent of my kid when she was in third grade and had to make her first collage.   The tone and pace is all over the place and it takes one out of the film as a whole.  And don’t even get me started with what they did to poor Slipknot.

Now, the movie was not all terrible, there were some bright spots.  Obviously, Margot Robbie’s portrayal of Harley Quinn was fantastic.  She played crazy and tortured simultaneously quite effectively.  I also really dug Jared Leto’s portrayal of Joker, a performance that was genuinely haunting and effectively.  The problem is that there was nothing for him really to do for 95% of the film, his first appearance in the shared DC universe would have been better saved for the standalone Harley Quinn film that we are getting.

Also of note in the film was Will Smith’s performance of Deadshot, which once again reminded us of the charismatic performances that Smith is known for.  He brings some grounding and credibility to a film that is otherwise all over the place.

One more performance of note was Jai Courtney who was virtually unrecognizable as Captain Boomerang.  He actually stands out as the one character within this film that may be truly a villain at heart.

All in all DC had a chance to do something really special with this film.  From what I hear, studio involvement and a fear of the film being too dark is what did this one in.  Hopefully Wonder Woman will begin to right their ship.

As a side note:  for the love of God DC, slow down and give your characters time to actually develop.  You do not need to race to catch up with Marvel, you have great characters, give them time to shine.

1 Response to Suicide Squad- the review (some spoilers)